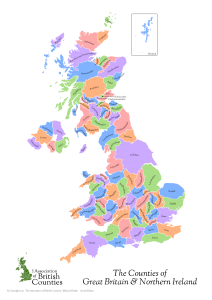 Until recently, the historic (or traditional) Counties of Great Britain were universally used as the standard general-purpose geographical reference frame of Britain. The location of every village, town and city of Britain could be simply described by reference to one of these Counties. All of them are a valid part of Royal Mail postal addresses. Yet many commercial map-makers, publishers of guide books and sections of the media have ceased to use them as a geographical reference frame. Instead attempts are made to use one or other of the two different sets of modern administrative areas both of which have been given the label “counties”, i.e.,

In each of these Acts the word “county” is nothing more than a label for the administrative areas so defined by the Act. These “counties” have no existence beyond the narrow confines of the Acts. The Government has consistently made this clear, e.g. on 1st April 1974, upon implementation of the LGA 1972, a Government statement said: “The new county boundaries are solely for the purpose of defining areas of … local government. They are administrative areas, and will not alter the traditional boundaries of Counties, nor is it intended that the loyalties of people living in them will change.”